Society 4.0 is not just another in a long line of books in which the author attempts to paint a picture of the future with the help of a crystal ball.

De Wit begins with a short historical account of the three different kinds of societies that humans have established to date. His account is interesting even to a historian such as myself. Initially, human society was based for a very long period of time almost exclusively on agriculture before the emergence of trade during the Renaissance marked the demise of the feudal system. This was followed at the end of the 18th century by the industrial era. De Wit then switches his focus to the present day and suggests that we now find ourselves in a transition phase, one that will take us into Society 4.0, an era in which advanced digitisation will largely determine the course of our lives.

While the latter conclusion should come as no surprise, the implications of this digitisation era certainly do. De Wit identifies eight ‘key issues’ that need to be resolved if we want Society 4.0 to become a humane and sustainable society. He believes that there will be less and less demand for human labour, a trend that can be attributed to the use of self-learning computers and robots driven by Artificial Intelligence (AI). Twenty years from now, for instance, a computer will be capable of writing this article – only one of many possible examples. Computers will soon be able to hold conversations that are indistinguishable from the way in which humans communicate with each other.

Capital in the hands of a few

De Wit, a professor of Strategic Leadership at the Nyenrode Business University, also links digitisation very neatly with another development: the transfer of the world’s capital into the hands of a small number of its citizens. Over the past twenty years these citizens have seen their wealth double in size and the trend is continuing in the same direction.

This 1% of the global population is able to invest freely in the development of AI. Elon Musk is currently exploring ways of enhancing human intelligence, for example by connecting the cerebral cortex with computer chips that could raise the human IQ to 300. According to De Wit, the elite has also been able to buy its way into many NGOs (non-governmental organisations) which has given it the capability to influence global affairs in an undemocratic manner, including through the United Nations. He refers, among others, to the Rockefeller Foundation and the Belinda and Bill Gates Foundation, which, contrary to popular opinion, are actually profit-driven organisations.

The question De Wit poses is this: in a world in which robots form the main source of labour and the elite is able to furnish itself with extra intelligence, what happens to the remaining 99 per cent? He also pulls no punches when he asks: are we on our way to an ‘Elite Reset Society’, one in which 1 per cent of the population controls virtually all of the means of production and the (social) media, or will we choose to form a ‘Glocal Citizens Society’? 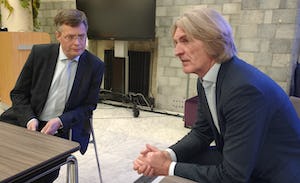 Former Dutch Prime Minister Jan Peter Balkenende (left on the photo) attended the bookpresentation of Society 4.0 and received the first copy out of the hands of Bob de Wit (right).

De Wit believes it is not too late to establish a society consisting of glocal (a contraction of the words ‘global’ and ‘local’) citizens. Once again he uses eight points to support this hypothesis. The main differences between the Elite Reset Society and the Glocal Citizens Society are that in the latter the processes are entirely democratic (De Wit believes in the wisdom of the crowd), human and animal rights are respected and the means of production and the (social) media are controlled by citizens. De Wit also stresses the importance of Nature: in one of his eight points he proposes that all production materials should be reused in order to form a circular system and stop the pollution of the planet. Another of De Wit’s suggestions involves capping the incomes of the world’s richest people so that a limit can be set on the constant growth of their wealth.

That De Wit’s message is ultimately a hopeful one is evident in the following extract: ‘The Elite Reset Society is the future scenario that extrapolates current developments as described in previous chapters. Yet history has shown that such a scenario has never become the new end state. Although ruling powers have always aimed to keep their privileged position, societies have changed because citizens started to fight for a better future.’

Society 4.0 is a skilfully crafted book – compact and concise on the one hand and comprehensive and thorough on the other. De Wit manages to fit all the pieces of the puzzle, one that will be familiar to many readers, together perfectly. The result is a coherent whole that offers many refreshingly new insights. Another notable feature is that the author provides not only an analysis of events but also actual solutions. Let us hope that De Wit’s Glocal Citizens Society does not remain a utopian idea.